Miss English and Her Pet Peeves

Miss English is still in fine health as she strides purposefully toward the nine-tenths-of-a-century mark, but she’s finding the world almost intolerable these days, and displays a distinct pettishness almost every time I encounter her.
Last week, a young man from the cable company (previously described as “a darling fellow” by my illustrious friend) had inadvertently left his Droid behind in her ancient Central Park West apartment. She noticed a message on the screen, which Miss E. was peering at through her thick specs in hopes of finding a way to stop the device from playing the Skrillex loop that meant a communication was incoming.

Well, the very sight of “u” for “you” and “r” for “are” practically sent her finger reaching for her iPhone’s side button, which I periodically remind her to press five times in case of an emergency. Then there was the sentence “If this old bat doesent learn to use her remote after I explane it this time Im going to loose my mind.” I knew something was amiss the moment I got off the elevator and heard the loud whimpering of Miss E’s whippet Merriam (a most empathetic creature, adopted recently through WRAP). Fortunately, I have my own key, and was able to reach my friend quickly and defuse the situation.

There are days when I can barely open my mouth around Miss English. When I took her to Ruby Foo’s for her birthday, the whole evening was pretty much ruined when she insisted that I was mispronouncing “daiquiri,” a drink I was ordering for her, for God’s sake, since no one else I know has drunk it since the 1970s.

It causes Miss E. some consternation to admit that despite her name, her English is not perfect either. Once I heard her utter the phrase “amount of people” after having downed a few lemony rum drinks. I gave her a copy of  Dreyer’s English for the above-mentioned birthday, and received a frantic call at 4 A.M.; she had just read page 63, and confessed in a whisper that she was not entirely sure that she knew how to use an en dash.

Despite these freakish inconsistencies, no one could deny that Miss English has a deep fondness for the language that shares her name, and in her honor I present a list of her pet peeves, slightly amended as of yesterday. If you think I’m going to invite her to copyedit it, think again:

2) One does not go to the store “everyday.” It’s “every day.” “Everyday” is an adjective, meaning that something is used or fit for every day, common—“an everyday occurrence.”

4) An apostrophe is never used with a personal pronoun; therefore, you shouldn’t write “The movie bored it’s audience,” but “its.” It’s true! (In that little sentence, the apostrophe takes the place of the missing letter I.) Similarly, it’s incorrect to write “Who’s book is this?” or “The fault was their’s.”

5) “Pick-up” and “check-out” are not verbs. You “pick up” a sailor or “check out” a library book. No hyphen. “Pickup” without the hyphen is a noun. It’s the jolt you get from a bracing cup of Earl Grey, Miss English explains. “Checkout” is the time at which a lodger must vacate a room, or a counter or area in a store where goods are checked out. (I told her that we all know that, but she was cranky at the time and, I believe, ready for a nap.)

6) Miss E. continues to express horror at the way in which the apostrophe has been misused to pluralize words. The hand-lettered signs are everywhere in her neighborhood, causing the dear thing to become virtually housebound for fear of seeing one more placard advertising “tangerine’s” or “video’s” or “pizza’s.” She has been heard to utter piteous birdlike shrieks at each new assault.

It’s been some years since Miss English removed “like,”as in “I was like, forget it!” from the list. She was uncharacteristically sanguine to discover that it had been granted the status of a so-called “discourse particle,” a phrase she considers delicious. She finds it harder to accept the fact that “processes” can indeed be pluralized the way all the news anchors are saying it, with an EEZ at the end, according to Merriam’s namesake dictionary.

8) It’s “stu-d’nt,” meaning you really don’t pronounce the “e,” not “stu-DENT.” And on a related matter, a whole generation of young girls believe there is a word spelled and pronounced “diddent.”

I recently pulled notebook and pen from Miss English’s delicate claw when she fell asleep in front of the tube, and found that she had been noting every instance of the use of the word “amazing” in commercials for dark chocolate mini-bites, air mattresses, and erectile dysfunction medications. When she woke up, she directed me to add the overuse of “amazing” to her list. “Tell them to find another adjective,” she instructed curtly. I promised that I would try.

In the punctuation wars, Miss E.’s granddaughter Penelope has long been her best ally,  roaming the Upper West Side on weekends and chronicling each egregious mistake spotted–making return visits to the offenders by night, her trusty stepladder in the backseat of the Subaru, her purse full of bottles of correcting fluid (a full supply of which is kept on hand for use with the Royal Quiet Deluxe typewriter). Last year, however, Penelope read about her kindred spirit across the pond, Bristol’s punctuation vigilante and his long-handled “apostrophiser, ” and then encountered a bit of negative press about him (his actions might be considered condescending, and sometimes muck up the signage).

“I’m having somewhat of an existential crisis,” Penelope confessed to Miss English last week. “Something of an existential crisis,” her grandmother responded distractedly. Two eternal seconds passed before Penelope bravely spoke again. “Apparently, both are now considered correct. And you know,” she added, apparently seized by an ambition to make matters worse, “the Oxford English Dictionary does updates every quarter. Some of your peeves might be a bit outdated.” I don’t believe they’ve spoken since, but I’m sure it will pass. 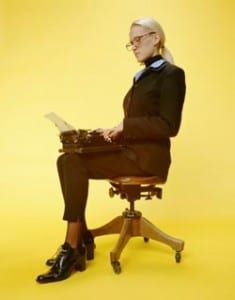